It is unlikely that any Milanese has ever set foot in the beautiful central courtyard of the State Universityin via Festa del Perdono: either to study there, or for a degree, or to tour the “Fuorisalone“That every year next to the Richini colonnade, the most extravagant works of design and contemporary art. It is very easy, however, that this Milanese does not know that at the back of the courtyard, on the opposite side of the entrance, there is a church. It was named after Most Holy Theotokos Annunciation and it was also built by Richini in 1637. “An architect who had a really innovative idea” explains Paolo Galimberti, Head of Cultural Heritage of the IRCCS Ca’ Granda Ospedale Maggiore Policlinico Foundation. “Having built a burial ground under the church, which was an integral part of the Ospedale Maggiore, he created a crypt between the church itself and the burial ground: a cavity with a valuable hygiene function’. Behold, this crypt and that burial place – finally visitable after years, thanks to the Ca’ Granda Foundation and with the contribution of the volunteer Touring members of Aperti per Voi – are now its protagonists an excellent study projectwhich day by day reveals unpublished details about the history of Milan, about the people who lived in the city, about their diseases and habits.

But before we go into the details of the study, let’s take a step back. As Galiberti mentioned, let’s not forget first of all that it was the State University of today the Maggiore Hospital of yesterday, founded in 1456 by Francesco Sforza to provide free aid to the poorest. “The burial space under the church was used precisely to house the remains of people who died in the hospital,” continues Galliberti. “However, it was only used for about seventy years: the space, in fact, quickly became saturated and the decay was slowed down by the nearby canal, which flowed where today via Sforza flows. The miasma were terrible and at the end of the seventeenth century it was decided to move the corpses to the present Rotonda della Besana and then elsewhere.’ In any case, it is estimated that the dead housed in the tomb are 150 thousand: number derived from the records of the Ospedale Maggiore, where there is a trace of every operation and hospitalization in the structure. “The burial ground was then returned to be used during his Five Days of Milan, in 1848 “Galiberti concludes” when about 400 bodies were buried here because it was not possible to take them outside the city walls. For fifty years the site became a city sanctuary, until in 1898 the remains were moved under the monument to Piazza Cinque Giornate. And the crypt was used as a warehouse.”

The crypt of the church of Beata Vergine Annunziata, Milan – photo Stefano Brambilla

Apart from the Risorgimento period, no one touched this seventeenth-century tomb over time. “Perfect conditionSays Cristina Cattaneo, head of LABANOF (Laboratory of Forensic Anthropology and Dentistry of the Department of Biomedical Sciences for Health, University of Milan). “When we first entered the crypt in 2010, it was thought that the burial site was a common ossuary, as there are many in Italy, and therefore contained mixed (or scattered) bones. But no: we discovered, thanks to stratigraphy, that these are primary deposits! That is, the dead did not suffer any kind of violation at the time of burial and the skeletal remains appear to be in a normal connection. A very important element for the study.” A study that began in 2018 and completed its first phase in 2021, under the direction of Cattaneo and the archaeologist Fabrizio Slavazzi, with the contribution of the Region of Lombardy and the collaboration of the Policlinico di Milano Archives. 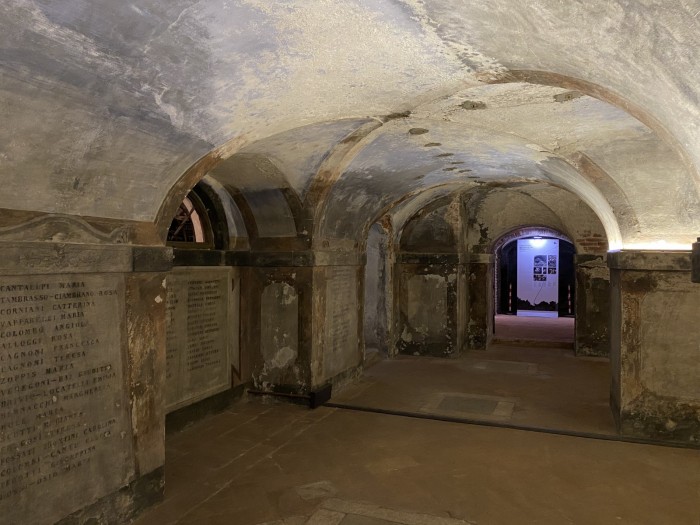 The crypt of the church of Beata Vergine Annunziata, Milan – photo Stefano Brambilla

So what did Cattaneo and his team, starting with Mirko Mattia, editor of the final volume of the project, discover? “Many interesting facts about the causes of death and about the state of health of the people of the time, first of all,” continues Cattaneo. “Looking at the remains, we understand that the Milanese of the seventeenth century fared much less well than those of the Middle Ages, for example: malnutrition syphilis was widespread and common. From the examination of the teeth and especially of cigar – a valuable archive of paleo-dietary and environmental information – you can tell what these people ate: mainly grains and legumes, but also ferns and horsetails, indicators of a poor diet. While some skull caps give us clues to autopsies and treatment methods of the time, as well Soft tissues have shown the presence of heavy metals, anesthetics and painkillers derived from the opium and the black hen. “But not only bones or tissues can provide details of seventeenth-century life: hair, fingernails and then leaves, stems, seeds, insects, fibers, fabrics. “All this is evidence that we are studying together with geologists, archaeologists, entomologists, botanists: an interdisciplinary team that is only at the beginning in the investigation of this huge amount of finds. Thanks to dnawe can also understand the geographical origin of humans: so far we have found mainly northern and eastern European strains.’ 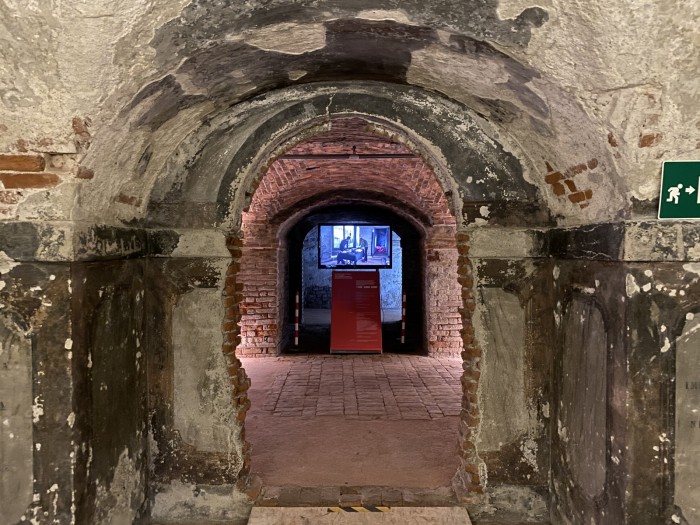 The crypt of the church of Beata Vergine Annunziata, Milan – the museum route also includes a video – photo Stefano Brambilla

THE PATH OF THE MUSEUM

In short, then, the burial space under the crypt of the Beata Vergine Annunziata promises to be a priceless treasure for an in-depth look at seventeenth-century Milanese life, especially that of the poorest, is often more difficult to research. “Not only” concludes Cattaneo “the disturbance of the bones present in the crypt is also necessary to shed light on the disease and pharmacology of the time. In a truly unique context, among others: on one side of via Sforza, we have the remains of the ancient hospital. on the other hand the modern Polyclinic. As if to testify shared medical and social struggles, defeats and achievements after centuries: the parallels, starting with the epidemics (plague vs covid) are surprising and sometimes disturbing”.

Today the crypt can be considered part of the itinerary “The Treasures of Ca’ Granda”where is Traveling volunteer members since 2019 welcome visitors as part of the Aperti per Voi initiative. After admiring the collection of medical instruments and beautiful canvases in the first part of the itinerary (read the articles below for more details), you can go down to the crypt, where it is set up. a nice tour of the museum which includes a series of panels illustrating the history and analyzes of the site, a multimedia support displaying a series of contents recorded during the study, a focus area on the seventeenth-century Danza macabre by the painter Volpino, painted in the tenth seventh century, the anthropological laboratory p a diorama made of real bones, which shows the viewer the appearance of the underground chambers before the start of the archaeological excavation. Immersed in reading and contemplation, we find ourselves immersed in life nearly four hundred years ago, until we find ourselves face to face with two seventeenth-century Milanese: the facial reconstructions of two women, derived from their remains and hair. Two women who died here, but who thanks to a hospital and the progress of science passed on to eternal life. 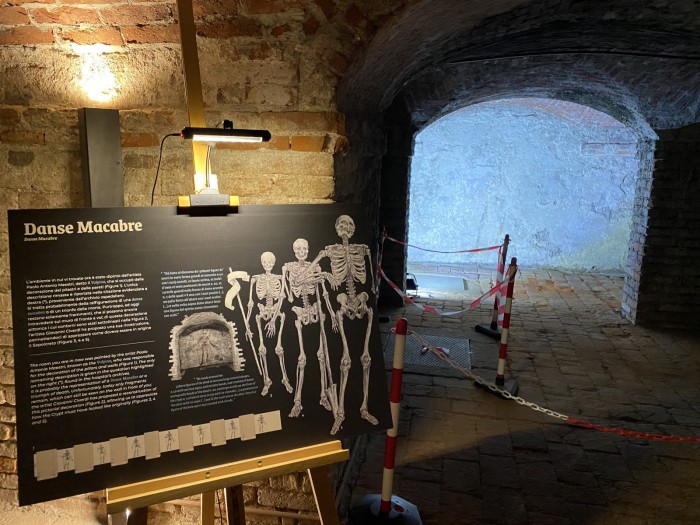 The crypt of the church of Beata Vergine Annunziata, Milan – the panel related to the Danza Macabra frescoed on the walls – photo Stefano Brambilla 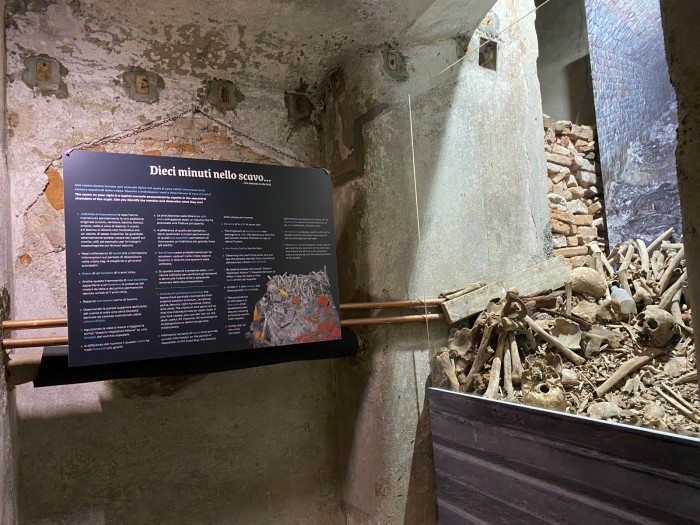 The crypt of the church of Beata Vergine Annunziata, Milan – the diorama with the excavation – photo Stefano Brambilla

INFORMATION
The Treasures of Ca’ Granda
Entrance from via Francesco Sforza 28, Milan. Free entrance.
Access in the crypt and the museum itinerary Be allowed in the afternoons (14-18) from Monday to Thursdaythanks to his welcome Traveling volunteer members as part of the initiative Open for you.
Traveling volunteer members also welcome visitors on Fridays and Saturdays from 10am to 6pm.
Summer closure from July 14 to the end of August.

– May 2021, the “I Tesori della Ca’ Granda” museum reopens, one of the places open for you in Milan
– March 2021, Gio Ponti’s secret masterpiece in Milan