Summer, as we know, is the time to experiment, try new things and indulge in small DIYs. This summer we decided to do a little “getting in shape” work. We restored a 14-year-old Apple monitor by connecting it with a series of adapters to a Mac mini M1, a state-of-the-art computer.

To do this, we had to rely on the flexibility of the video output of the USB-C standard, because the HDMI port could not be used in any way. But let’s see in detail what we have done and with what.

There’s little to say about the Mac mini in general: it’s one of Apple’s most beloved computers ever. Especially the Mac mini M1 can be said to be excellent. A computer that has power and unique thermal, thanks to the very quiet fan and plenty of space inside the generous and iconic body. The M1 revolution saw him as the protagonist. We reviewed it here and we can say that a large part of the editorial team was convinced and bought this little bomb. Specifically, the editor’s Mac mini M1 used for this transformation is a model with 16 GB Ram and 1 Terabyte SSD that was purchased refurbished a few months after the M1 mini was released in November 2020 along with the MacBook Air M1 and MacBook Pro 13 M1.

We consider it highly competitive with the iMac, which has everything but the aesthetics and the display (plus a few fewer ports, as we’ll see below). That’s why we decided to find a “vintage” solution that would allow us to enhance the Apple aesthetic without punishing the wallet. 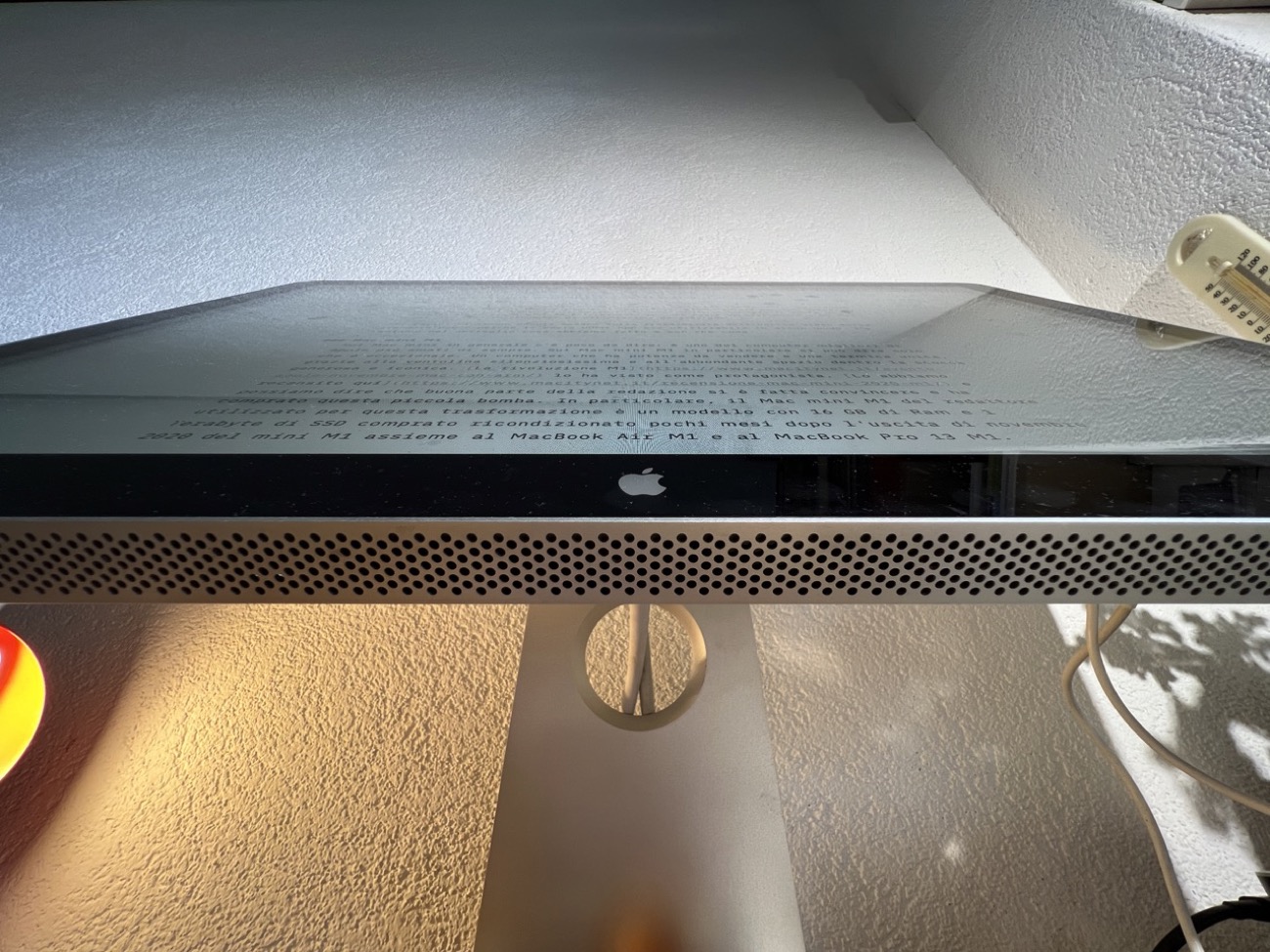 At the end of 2008, Apple announced the release of a new display for the new family of MacBooks, which had just been born. Cinema Display Led had a 24-inch backlit screen with still interesting features: a maximum resolution of 1920 by 1200 pixels, a pixel density of 94.3 pixels per inch, a 16.7 million color IPS panel with a horizontal viewing angle of 178 degrees and vertical response times of 14 ms, contrast ratio 1000: 1 and 330 cd / m2. A good screen, bright enough and with a resolution suitable for those who want to write and watch videos up to 2K (which is not bad at all for Netflix and Tv +).

The monitor, model A1267, was in production from October 2008 to July 2010, it originally cost 849 euros, it has a classic design with a 9.4 kg aluminum body, L-arm, speakers, microphones and a built-in iSight video camera. In addition, it has a row of 3 USB 2.0 ports and has a very special cable: in fact, a proprietary non-replaceable cable comes out of the monitor (it does not come out) with three terminations: a mini DisplayPort male (which we will discuss at length in a moment) , a Usb 2.0 and a first generation MagSafe.

In fact, the display was designed by Apple as a basis for the newly launched MacBook: with a single cable divided into three terminals, it was possible to efficiently connect to the power supply, data port and video port of the computer. bringing all functions to the Mac The presence of USB ports on the back also allowed you to connect a wired mouse and keyboard instead of using wireless ones, effectively turning the display into a docking station for Apple laptops.

Almost fifteen years later, is it still possible to use it with a Mac mini M1? 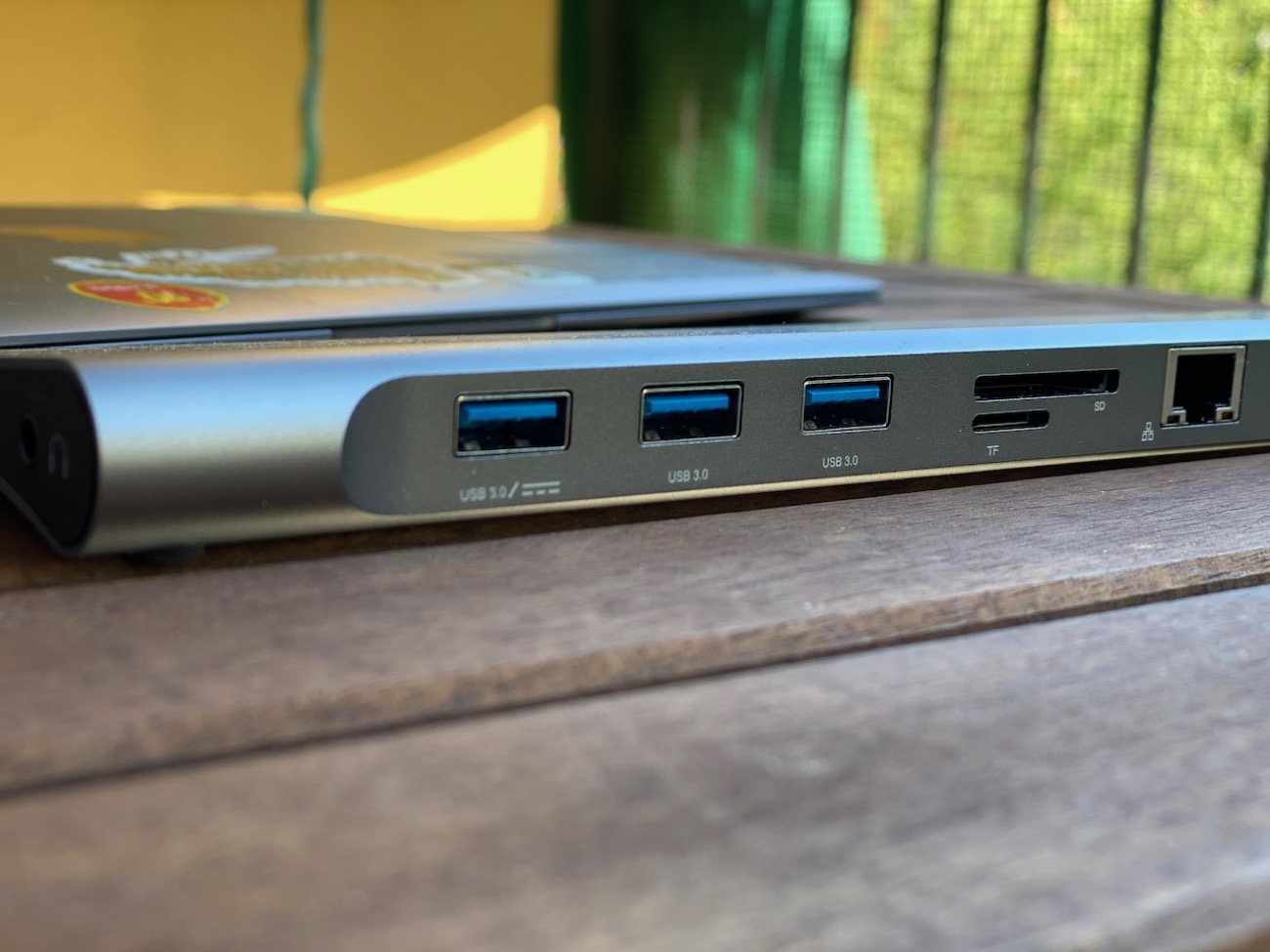 As it became immediately apparent, the only real problem with connecting the monitor to a modern Mac is the absence of a mini DisplayPort or DisplayPort port (there are numerous and inexpensive adapters to convert the two DisplayPort formats). It’s a shame because in reality the DisplayPort format is completely incompatible with HDMI and there are no adapters on the market that can convert the signal from one to the other. Basically, you can’t connect your Mac mini to the Apple Cinema display using a simple adapter.

However, there are various adapters for connecting a DisplayPort (and thus mini DisplayPort) display to a computer via Usb-C. And that’s exactly what we addressed. We found two solutions, one cheaper and “easy” and one more expensive and inconvenient. Let’s start with the last one. 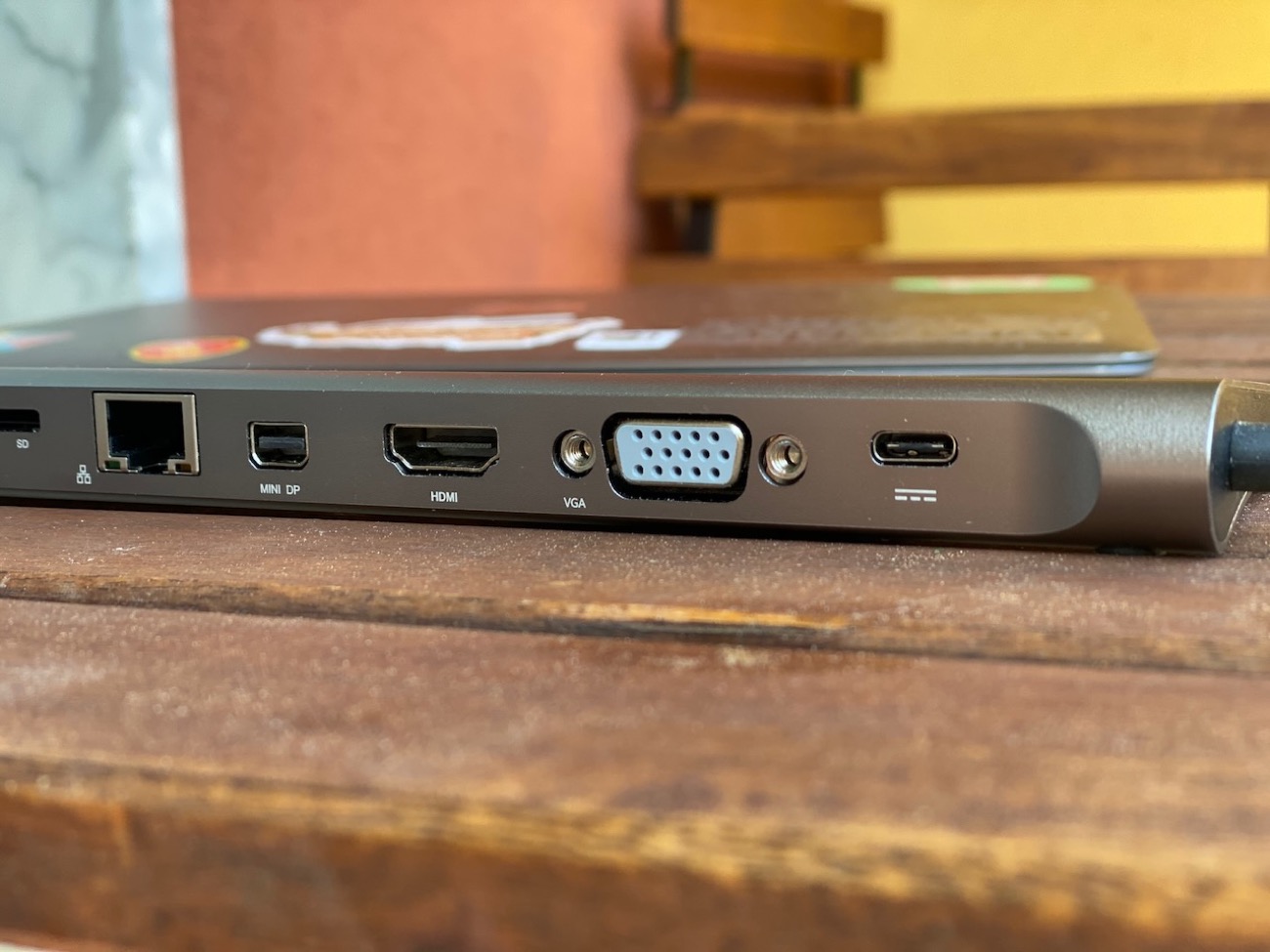 An expensive dock with adapters

Features include a 4K HDMI output, Mini DisplayPort, VGA, LAN, PowerDelivery, USB 3.0, card reader, audio port, anthracite/black aluminum case. Expensive, very rich, certainly big for our purposes, we used it for a few days and we can say that it works perfectly on the video connection part, as well as allowing you to connect the USB 2.0 cable to the monitor, thus getting the convenience of iSight, the microphones and above all the built-in speakers, which still perform well compared to those on the market and mostly controlled directly by the Mac.

However, we decided to look for a more “light” solution. And we found it. 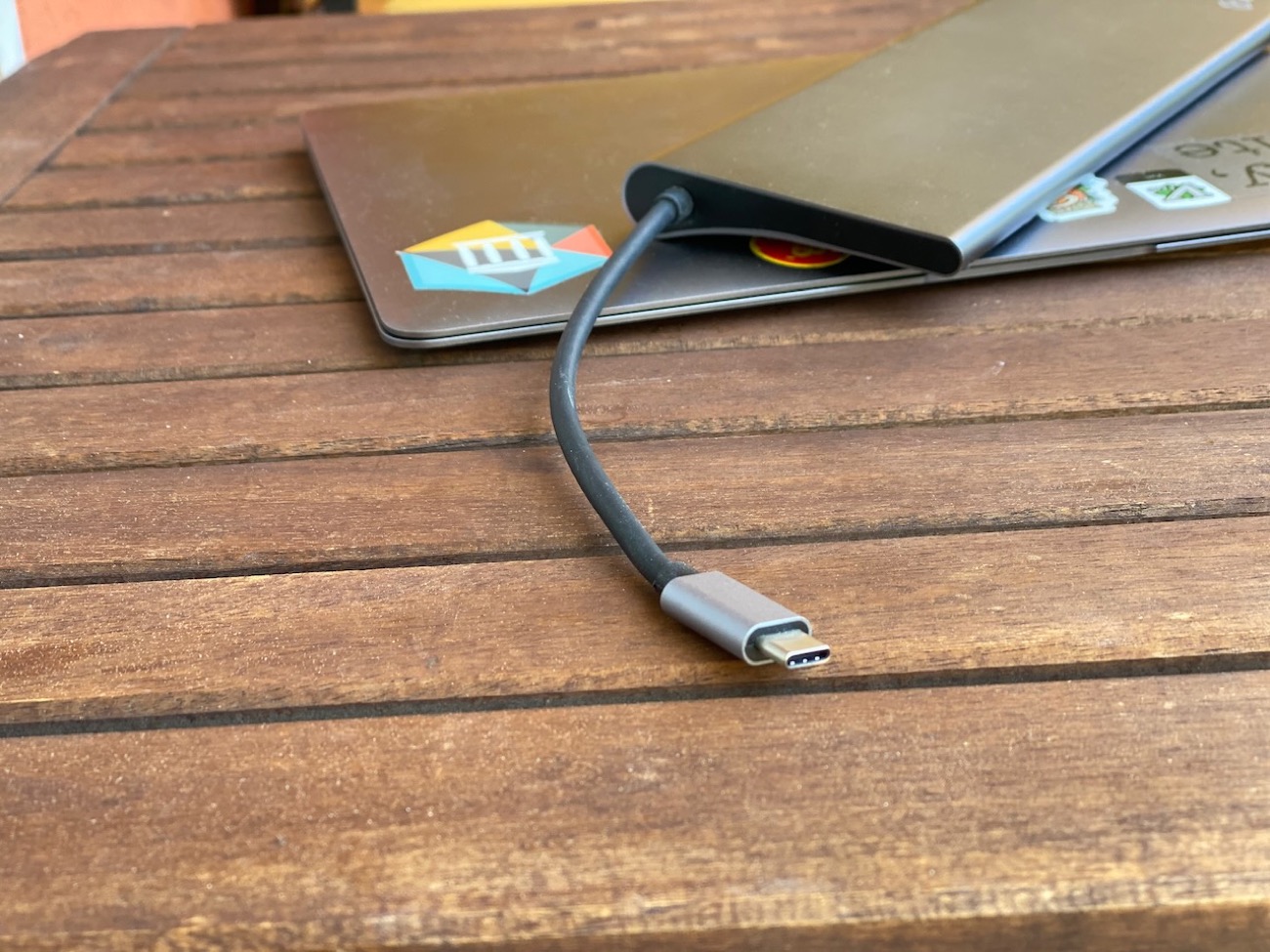 A much more compact little adapter

Why use a whole mount when an adapter is enough? Or rather two? We got an adapter from Coetech, model USB-C Adapter to Mini Displayport, Type C to Mini DP with PD charging support [email protected] designed by Chinese company for Apple iPad PRO 2018 and MacBook PRO 2017/2016.

We’re happy to report that it also works perfectly with the USB-C of a 2020 Mac mini M1. With this adapter we used one of the two USB-C ports (only two, unfortunately) and connected the display’s USB 2.0 to one from the two Mac mini USB-A ports.

This is where the problems started, especially during sleep and wake up of the computer. So much so that in the end we opted for an adapter we had at home and connected the USB 2.0 to the second USB-C on the Mac mini without any further problems.

Unfortunately on Amazon the adapter we bought is no longer available, but there are other equivalent models like the one from Cerrxian or the one from Gintooyun. 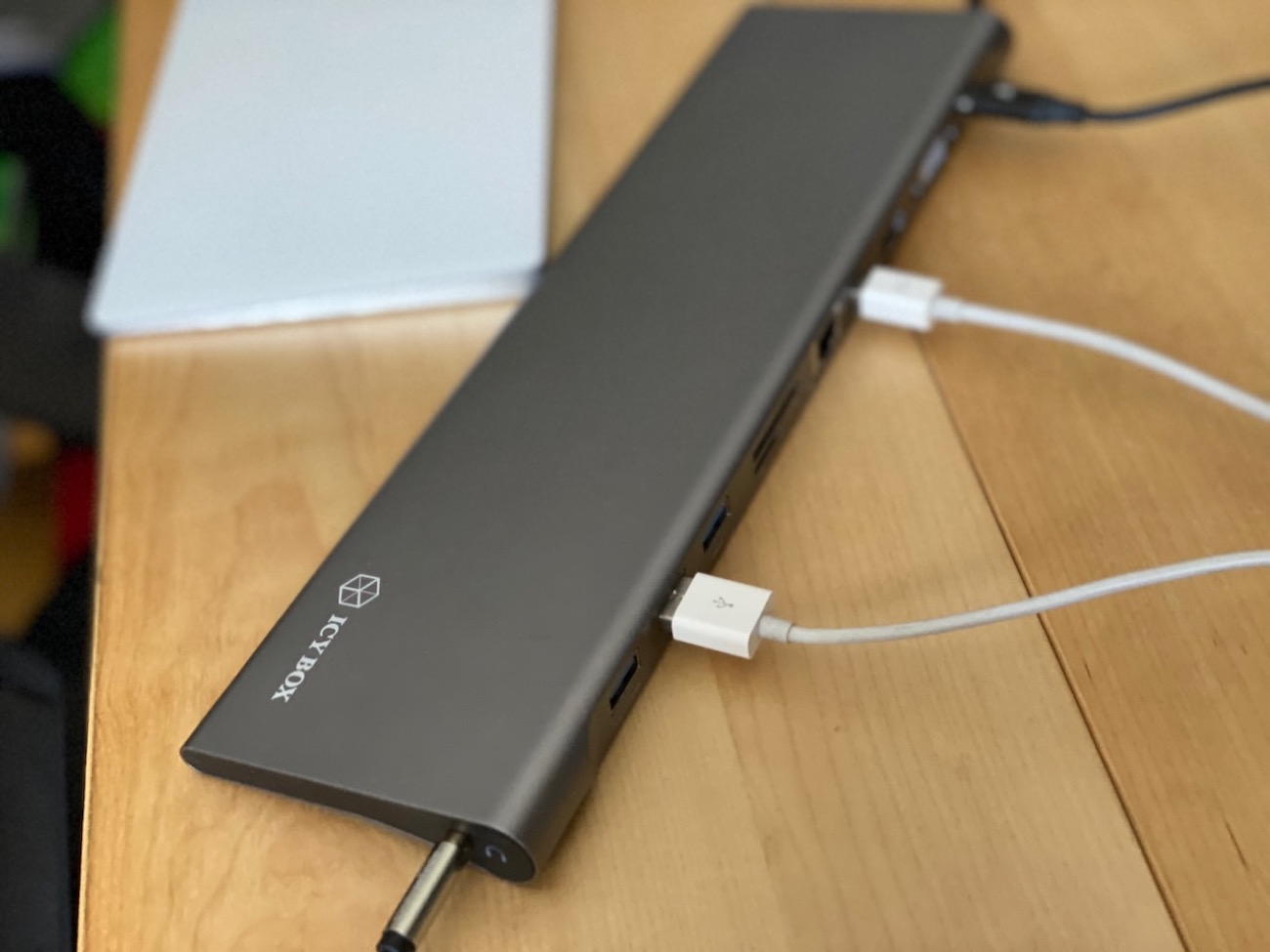 Being able to have a low-cost “vintage” Apple monitor (currently these monitors can be found on eBay for around 100-150 euros) allowed us to recreate a work corner suitable for current technologies but with a unique vintage flavor. The resolution is more than adequate for those who have to spend long hours in front of the computer writing and, in our opinion, 24 inches is almost a perfect size for those who sit at a table at a normal distance from the screen.

Being a ‘real’ job and not a build for Instagram or YouTube, as you can see from the photos it’s a little more confusing than you’d expect in an age of ‘fake’ aesthetics. However, it is genuine.

We plugged Apple’s USB keyboard and Apple’s trusty CD reader/burner both into the display hub, either way gaining an advantage over using the Mac mini’s few ports. Finally, we use the latest generation trackpad which makes using the computer much less stressful on the wrist and offers the same gestures as a MacBook, thus making the use of the Mac mini and the MacBook Air M1 symmetrical (which is the other computer used by author). 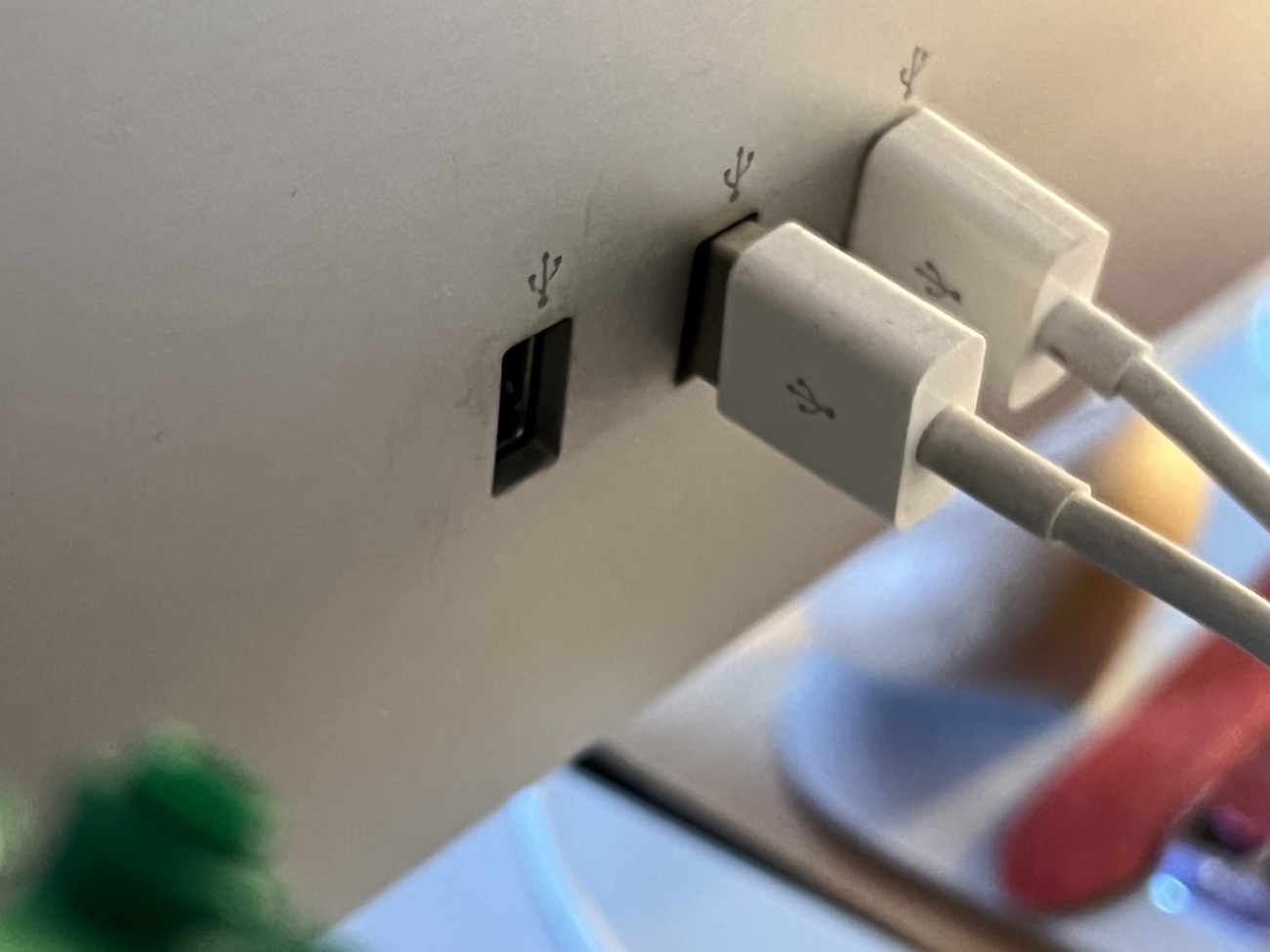 Underneath our Mac mini M1 is the ‘old’ Mac mini from 2008, the one that is still compatible with the MiniDisplay port but unfortunately, unlike the display, is now ‘worn out’ for modern use.

On top of the Mac mini is the inevitable Lego bonsai, which is the only plant that has a chance of surviving around this computer.

Finally, two practical considerations: the first is consumption. Especially in the summer this screen, which an internal fan is completely impossible to hear but which serves to dissipate the heat of the logic board, gets quite hot. The LED technology of the panel itself is not the most efficient in terms of energy consumption. We have no idea how many degrees it puts out, but we do know that the total power the display requires is a maximum of 212 watts when charging a MacBook Pro. In fact the screen does not have an off button (it belongs to “at that time” of Apple products. by Steve Jobs and designed by Jony Ive), but we know that consumption with a 230 Volt power supply (as in Italy) in standby or sleep mode it is 0.85 Watts, at full brightness it is 81.2 Watts, at half brightness On the contrary it consumes 57 Watts. The best 24-inch monitors today consume between 50 and 30 watts.

At half brightness, which is what we always use, the screen is easy on the eyes and perfectly readable. The pixel size applied to writing and reading activities (plus some movies and videos) is very relaxing on the eyes. We do not recommend this to anyone who does video or image editing.

The second thing: the screen is about 2 cm thick. Since iSight (Apple’s built-in camera) has an awkward 640 by 480 resolution with very low brightness, and the top microphone is equally underperforming, the announcement of Camera Continuity with macOS Ventura was the last push we got. this screen “in production”.

In fact, not only is it very beautiful and easy on the eyes, with still acceptable consumption, but it is equipped with audio speakers that allow it to be used for multimedia and, with an iPhone equipped with an adapter with a coupling depth of 2 cm (this will be in case where the problem) is still perfectly compatible with the cursed world of video calling and video conferencing, which for some years now has become the doom for many of us.

In conclusion, the summer venture was, from our perspective, a success.